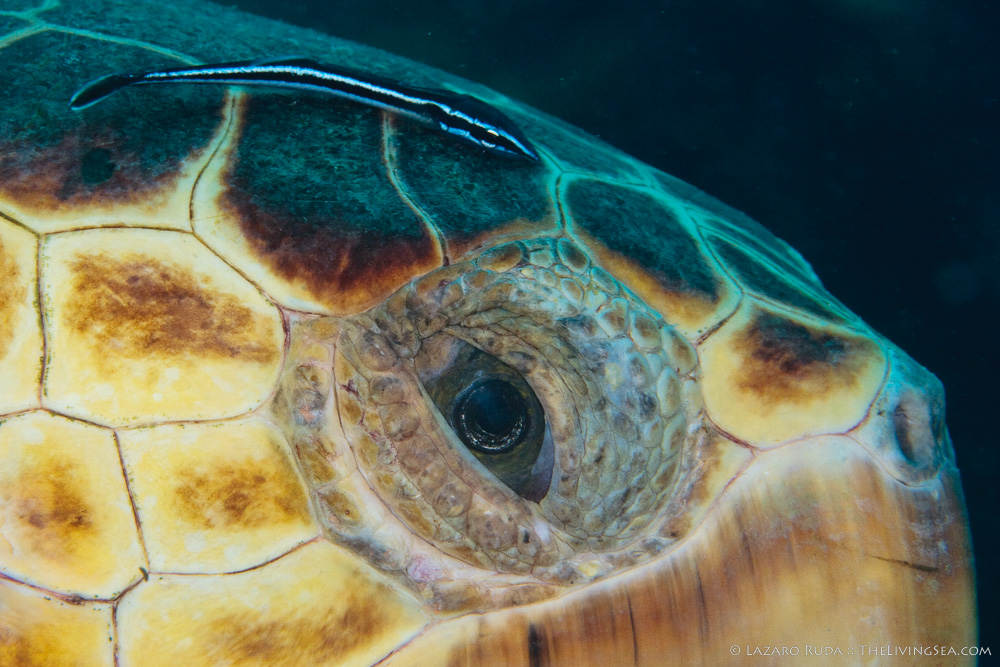 My eye peered through the eye-piece of my underwater camera as I focused intently on the tiny creature before me. All my attention was set on capturing the perfect moment. When suddenly a strange feeling came over me — I felt eyes upon me! Without thinking, I quickly raised my head out from behind the camera not knowing what to expect.

Right in front of me began to appear a large ominous creature from the murky ocean depths. Its eyes were locked with mine. It took me little time to realize I was going to have a very close encounter. The question was… Was it friend or foe? Okay, so maybe a Loggerhead sea turtle isn’t exactly on the top of the list of the world’s most dangerous animals. Anyone who has ever seen a Loggerhead turtle crush to pieces a conch shell with its powerful jaws quickly develops a degree of respect for these leviathans.

The first thought that went through my head as it approached closer was, “Geez… I hope it doesn’t think my shiny underwater camera is some rare and delectable conch shell.” But certainly, if anything was going to get bitten it would be my camera before me. Or perhaps I would let it get me instead — the scar would, at the least, make for a great bar story. Of course, the turtle’s size and demeanor would be exaggerated exponentially every time I would tell it. 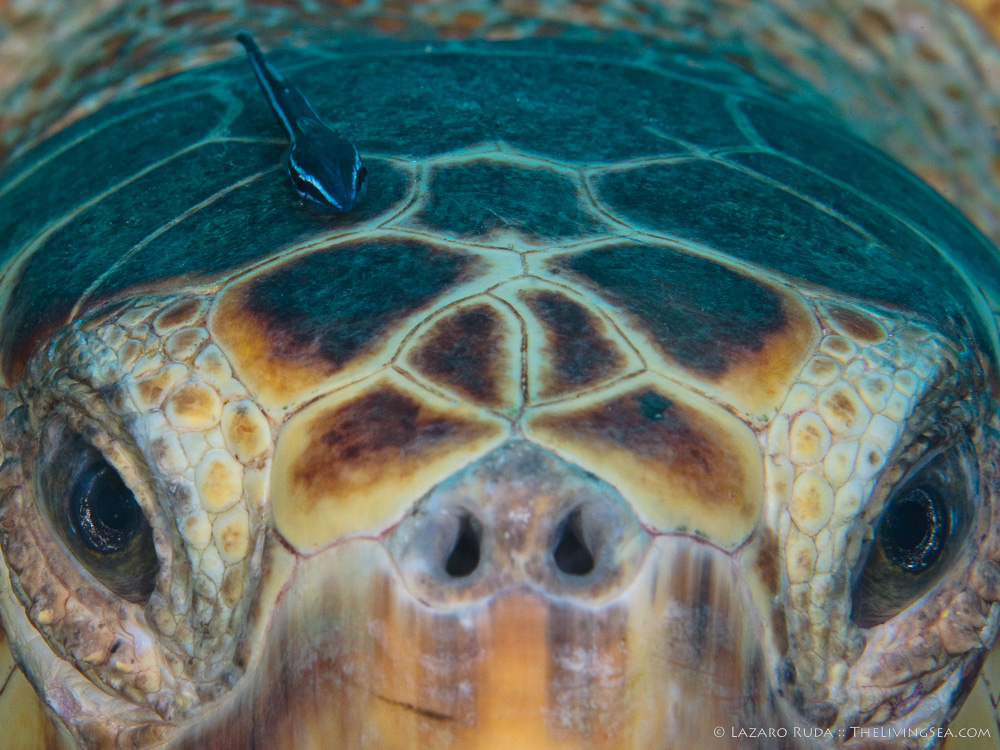 Thankfully, my training as a professional shark handler kicked into gear… I swam in the opposite direction as quickly as I could! Still the Loggerhead turtle continued in my direction. Inch by inch it approached again. This time I stood my ground water! The beautiful little Loggerhead turtle began to circle around me. She seemed keened on getting to know me (must be my animal attraction!). Around and around she went. The urge was too much for me — I reached out and gave her a light scratch on the shell.

Under most circumstances the dive guide in me would have been frowning upon such interactions. I look upon such encounters as if a complete stranger suddenly came up to me and began to scratch me. That would be just a little too weird for me. And in most instances, sea turtles are quick to leave should such an encounter occur.

But considering this friendly Loggerhead’s interest in me, I dared to be so bold. Much to my surprise she appeared to enjoy the light scratching of her carapace – the Swedish sea turtle massage. She continued to circle around me appearing to want more. Putting my camera down in the sand, I indulged her with great joy. We looked like two Spanish dancers as we tangoed together across the top of the reef.

Fifteen minutes had passed and she would not leave. Finally she found a patch of sand and settled in. Tucking her fins under her, she continued to indulge in her odd-looking but extremely talented masseur. The whole time I was as giddy as can be to have such a unique encounter. Her shell was so shiny by now she would certainly get the part for the Turtle Wax commercial.

Many times I have seen sea turtles partake of themselves of a good shell scratching on the edge of the reef as easily as humans do with the corner of a wall. But something dawned on me — there’s always that one little spot you can never reach. Reaching right behind the Loggerhead turtle’s neck, I began to scratch her shell ever so lightly. Like a dog being scratched behind the ear or the leg, I watched in joy as this sweet little Loggerhead turtle fluttered her eyes in delight.

Nothing can instill a more passionate love for animal life than such personal close encounters.

About one minute into the sensual, behind the neck massage, I could see her eyes getting heavy. Within a few minutes I watched this lovely little Loggerhead turtle close her eyes and fall into a deep and pleasant sleep. Careful not to wake her, I quietly tip-toed fin-toed myself away wishing her joyful dreams.

Five minutes later, as I continued drifting down the reef, a small Hawksbill sea turtle headed straight for me. Once again, the underwater masseur was giving a turtle massage to another satisfied client. Word sure travels fast underwater (4 times faster than air: 3,400 miles per hour to be exact)!

Many folks frown upon such close encounters, whether with turtles, dolphins, manatees, or countless other wild animals. And while I’m quick to somewhat agree, I believe if the encounters are done in a respectful, educated, and non-threatening way, allowing the animal to feel comfortable with your presence, then few moments in this world are as rewarding. Nothing can instill a more passionate love for animal life than such personal close encounters. These moments are the one’s that help reinforce our bond with the natural world and the importance of our stewardship towards the planet.